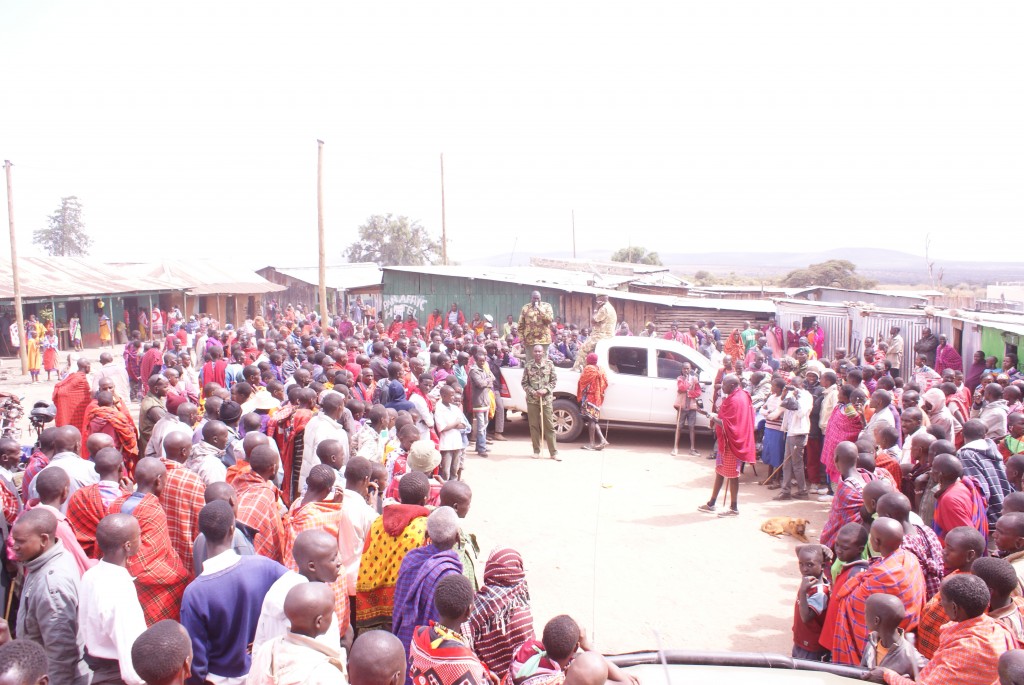 after a morning tour to their heifer and shoats boma’s, I had a brief talk with management who raised concerns over the spread Malignant Cartarrhal a disease caused by Wildebeest once they drop placenta after giving birth and this was affecting their livestock. I thank Mr. Kimujino and Ole Keshe “the Major” who comes from Masaai community by explaining how traditionally Maasai elders would do to prevent this, Its unfortunate that these old men are not there presently and we have to embrace the modern methods on which includes fencing the wildebeest outside the ranch and its not sustainable. We are now ready for our last meeting point but pretty far away, Major ensured all was in and we have not left anything, this was just after losing 3 mattress between Lorgarian and Naroosora. After cruising for 2 hours here comes Naikarra trading center and its market day accommodating people from Olposumoru, Oldekesi and Meguarra among others. Naikarra meeting would turn out to be the most populated meeting I ever did on this particular walk. In Naikarra Stephen Kisotu of Friends of Conservancy had offered us a place to and we all settled there at 2pm before addressing a meeting at 4pm, I was now feeling tired fatigued amidst pressure in planning for the final day that required a lot of coordination.

As usual our Major who now represent KWS lined every one for a drill or safety catch looking at what is ahead of us and what need to be done. I have always realized that as I come to an end in any particular walk I am always sick headache and stomach upsets, I initially thought I was sick but was advised to make sure I eat and sleep early something that has never happened as this is the time that I handily sleep or eat. Where is Kironga the victim of small intestine? He was busy preparing for another goat ….. I will miss this man a.k.a “ Nyatta”, I hope we gonna get the whole goat. Astoundingly before the meal a.k.a brought all the parts that are sensitive and vowed to explain what had happened with the missing parts on the final day, am ready to sleep amidst headache and stomach upset and Peter had to ensure the tent that became “ music studio “ was some meters away! Will the owner spend there ?