Jim Nyamu commonly known as “Elephant Walk Man or Jimbo” arrived back home on 20th October. He recently completed his 560-mile journey to Washington DC from New England to raise awareness of the plight facing endangered elephants in Africa.

A least 3 elephants are killed every day in Kenya for their ivory, – at this rate, in approximately 10 years elephants will be made extinct. In 1979, there were an estimated 1.3 million African elephants. Today, fewer than 400,000 remain and some authorities estimate the number to be considerably less. This crisis must end and Mr. Nyamu walks to bring attention to this global trade issue.

Between February and August, he walked 2,174 miles (2,500 km) in Kenya and he recently culminated his 34 days USA walk at the White House on Oct. 4 during the International March for Elephants (www.iworry.org) organized by the David Sheldrick Wildlife Trust.

“A poacher is a thief who steals wildlife,” Mr. Nyamu said. “We are witnessing an upsurge in poaching of ivory and rhino horns to unprecedented levels.”

The Ivory Belongs to Elephants walk USA was launched from the HQ of IFAW in Yarmouth Port – and Jim has been walking ever since. He was received by Kenyan Ambassador in DC and gave his final presentation at WWF DC office.

An elephant research scientist and founder of the Elephant Neighbors Center in Nairobi, Kenya, Mr. Nyamu spoke at different Universities such as Allegheny College, Yale University, Princeton, Salisbury, Delaware, Sidwell and American University among other organized groups of people. He was interviewed by Good morning America, Voice of America, National Geographic among other local TV’s and radio stations.

“We hope Jim’s US walk will raise awareness that elephant protection is a global concern. Citizens around the world must do their part to protect these magnificent creatures and help keep elephants safe from poachers.” said IFAW president, Azzedine Downes. 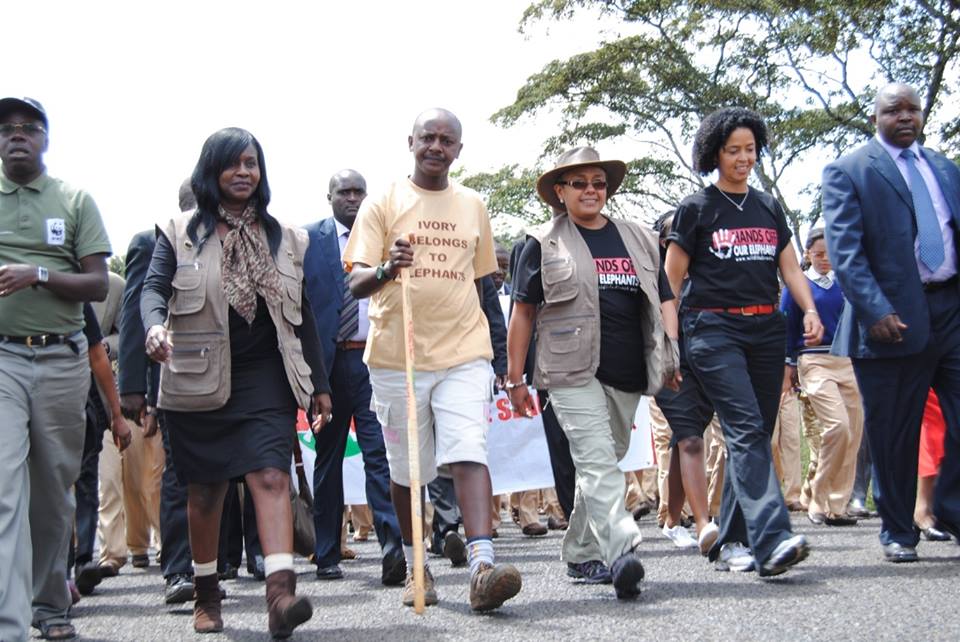 Mr. Nyamu is scheduled to go back to the USA on 10th for him to be in Colorado for the Ivory Crush that is happening on 14th November. Mr. Nyamu received a personal invitation from the US Fish and Wildlife Department to grace the occasion which will see the crushing of 6 tonnes of Ivory seized in the USA. Mr. Nyamu deems this as a step in the right direction and hopes that this will send a clear message that poaching must come to an end.