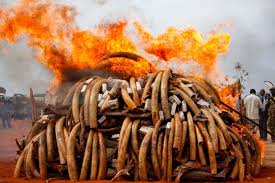 On April 30th 2016, President Uhuru leads from the front in burning over 100 tonnes of confiscated ivory tusks and 1 ton of Rhino horns. This will be fourth time that a public burning ceremony has happened in Kenya since 1989 and the big haul ever. President Moi set the ball rolling in 1989, Kibaki followed in 2011 and Uhuru maintained the tradition in March 2015.

The first ivory burning was held in 1989 in Nairobi’s National park in a ceremony that generated world headlines. President Moi and KWS Director Dr. Leakey set ablaze 12 tonnes at what is now known as the Ivory Burning site at the Nairobi National park. A monument stands to commemorate the event. In 2011 President Kibaki lead the country in lighting the fire underneath 5 tonnes and in 2015 March President Uhuru Kenyatta showed the commitment of his government in fighting the illegal trade in ivory by burning 15 tonnes in commemoration of World Wildlife day.

Uhuru Kenyatta will be the first Kenyan president to have conducted this exercise twice. It is a pledge he made in 2015 when he promised that Kenya would destroy the country’s entire stockpile of seized ivory, an estimated 136 tonnes countrywide as indicated in the Kenya Wildlife Service national inventory of 2015.
The big question on several Kenyan minds is why burn the ivory? Why can’t we sell this ivory and use money to conserve the living elephants or preserve the ivory in the National Museums for future generations and research. I have listened to Kenyans sharing their opinions on the practise and many do not see the value in burning ivory.

I remember I had similar sentiment when I first took an interest in conservation in high school in early 80’s. I had come across a conservation magazine published by East African Wildlife Society commonly known as SWARA “Antelope”. In the edition, Dr. Leakey who had just been appointed KWS Director talked about his intention to convince President Moi to burn 12 tonnes of ivory that was scheduled for a big sale in China. Like any other Kenyan, I did not understand why tusks of huge economic value had to be burnt. It looked like a PR exercise that would not do much for conservation.

The first time I witnessed ivory getting destroyed was in the US. It was in 2013 and I had just completed a 560 mile elephant education campaign walk from Boston Massachusetts to Washington DC. At the end of the gruelling walk, I got invited by conservationists in the US to witness an ivory burning ceremony in Denver Colorado. 6 tonnes were to be destroyed. It proved to be a very emotional moment. Some of the ivory tusks were blood stained and I could not stop thinking about the pain and the family separation some of the dead elephants went through.

According to Elephant Trade Information System, US is the second leading consumer of Ivory after China. In 1989, USA was the first country in the world to announce the intentional burning of ivory, an act that inspired Kenya to do the same. Since, then several countries worldwide have used the symbolic power of fire to declare war against ivory poaching including China, Hong Kong, Italy, Gabon, France and Chad.
The Convention on International Trade in Endangered Species of Wild Fauna and Flora (CITIES) lays out a very clear process for a country to sell her stock pile or live elephants: All African elephants are placed under a category called Appendix I. Which basically prohibits trade or sale of live elephants as they classified as endangered. If a country wants to sell its stockpile, that transaction would be deemed illegal under the CITIES rules.

However, some countries such as Namibia, South Africa, Botswana and Zimbabwe fall under Appendix II, which applies, to countries where elephant populations are not endangered and a country is allowed to sell its stockpile or trade in live elephants.

The question of Kenya selling her stockpiles of live elephant is a mute one since Kenya is classified in Appendix I. According to Elephant Trade Information System, Kenya is among the gang of 8 countries in the world. Kenya, Uganda and Tanzania are classified as the source of ivory meaning most of the ivory originates from East Africa and transits through Malaysia, Philippines and Vietnam before reaching the consumer markets of China and Thailand.

During the last CITIES meeting Cop 16 in 2010, member countries were asked to be proactive in ending ivory trade and poaching. The source countries Kenya, Uganda and Tanzania were requested to work as a team to establish an integrated strategy to reduce poaching. The strategies included joint patrols across the border, ports, shared parks and establishing forensic laboratories to identify the ivory location and an account of ivory stockpile. Transits countries were also asked to work together in ensuring that no ivory passed through their ports as well as dismantling the link between the brokers, the sources and consumers. The consumer countries China, Thailand and the US were ordered to reduce domestic ivory demand and make real efforts campaigning against the consumption of ivory products.

Burning the ivory is not a requirement put in place by CITIES. It is just a symbolic way of declaring the lack of value in ivory stockpiles. Kenya want to reaffirms her commitment towards elephant and Rhino conservation and burning the ivory also demonstrates to the regional leadership that we are serious in war against poaching.

Burning the ivory makes it clear, that there is no intrinsic value in an ivory tusk stolen from an elephant. Anything that is worth burning is not worthing keeping. This act of burning ivory reduces the temptation of corrupt officials who might have designs on seized ivory stockpiles. One particular incident in the past involved the resurfacing of ivory thought to have been in custody in Kenya showing up in Vietnam.

There is a growing concern over elephant and rhino conservation in Kenya and the real possibility of extinction if half-hearted measures are taken. A big percentage of Kenyans lack proper information on the benefits of wildlife, let alone how to participate in conservation. In my view, Kenyans simply lack the awareness and armed with the right information, they would all arrive at the obvious conclusion. Kenya’s wildlife is our heritage and if do not step up, speak up and play our little part in conservation, we will disinherit the future generations of this precious resource.

There can be no half measures. Ivory Belongs to Elephants and only them.