The decline in the population of the African elephant (Loxodonta africana) from 1.3 million to 600,000 in 1979 and between 1980 and 1989 was caused by poaching by the use of either guns or poisoned arrows. In Kenya, the population of elephants has dropped from 167,000 in 1973 to 16,000 in 1989.Since 1989, elephants started retreating from the parks and reserves as they were threatened by poaching. 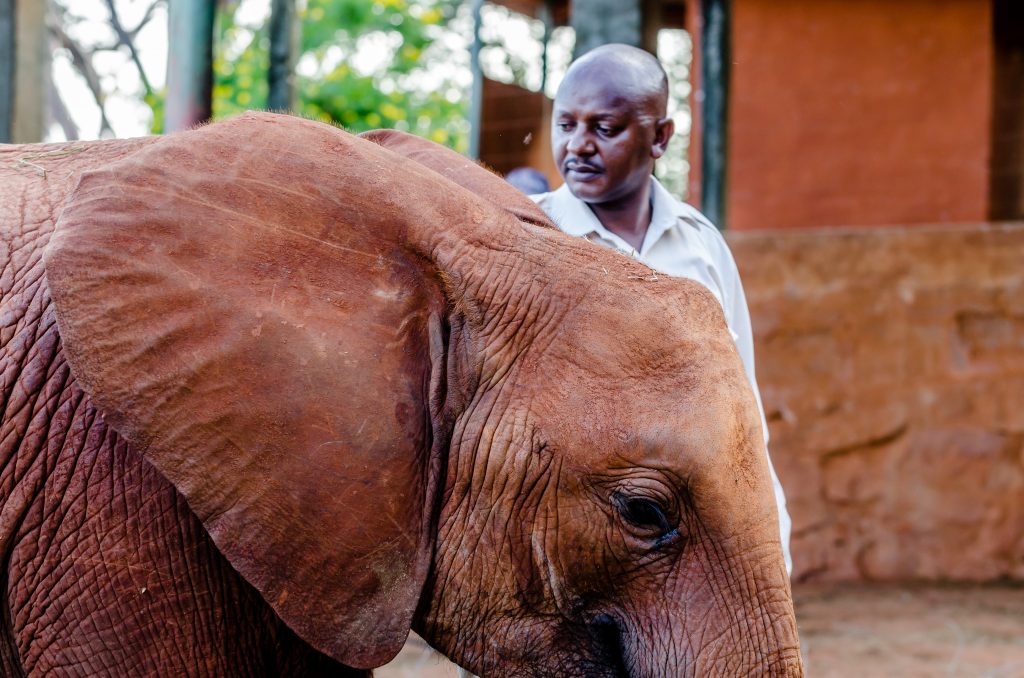 Elephants are highly intelligent in that they can sense insecurity and form coalitions between bachelors and breeding herds. This was observed in areas such as Amboseli, Kilimanjaro commonly known as “Kili”. Elephants stopped crossing the Kenyan –Tanzanina border into Amboseli Park and instead foraged into West Kilimanjaro. The other area was Tsavo where elephants migrated to Meru National Park through North Kitui, and stopped at Kora. This new lifestyle lasted in some areas until 2000 when elephants started re-establishing their former migratory corridors.

Several studies that I was proud to be part of were carried out. These studies involved monitoring elephants’ movements by the use of satellite collars. In 2004, while working for the African Conservation Centre (ACC) I collared some elephant with the hypothesis that , “Nguruman elephants would cross the Tanzania border through shompole hills and Nguruman elephants would prefer foraging in Nguruman and Loita forest “.
.
The results to this shows a 95 % kernel range where a second hypothesis was applicable where both female and male used the same range and were still recovering from the poaching memories. This trend was different in some areas where elephants had started moving out since the security had improved. In Ngong town, Kiserian, Machakos among other areas, people would call these elephants ‘marauding elephants’. This is the case now, elephants feel that their migratory corridors, that they previously used have been encroached. Development and farming have replaced their migratory corridors.

I decided to do another study titled; “Why do elephant move “ in Mt Kenya- Laikipia and Aberdare areas and found that elephants move from one area to another area because of the following reasons.
1) looking for water
2) looking Salt links
3) For mating and Curving down
4) Looking for some species that are medicinal such as Lobellia gradiforia found in Mt Kenya and lastly,
5) Habitual movements.
It is then that I chose to walk and educate our communities on how can we manage wildlife conservation first by understanding the genesis of this problem as we look for the solution together.
Various scholars such as Dr. Cynthia Moss and Joyce Poole illustrate that elephants have a good memory. This has been tested by the technology where radio collars have proved that elephants would maintain some paths for a period of time.

I have been studying elephants for the last now 17 years. I am Research Scientist, something that was planted in me at the age of 15 years by my uncle who was a committed member of the Wildlife Club of Kenya (WCK). During my right of passage, he brought me a magazine by the name “ Komba” which is a Swahili name for Bush baby (Galagos). This magazine was written by young students of WCK who shared stories about their projects. I became interested and the first thing I did when I joined high school was to look for the club. Regrettably there was no wildlife club in my former high school, Ichichi High school. In two weeks’ time, I had befriend my then history teacher, Mr. Kanyi, who is now Deputy Principal in a different school, and he is my close friend to date. We both had no idea on how to start a wildlife club. I took the challenge and I wish to thank Mrs Dorothy Ngang’a, the then Education officer at WCK who guided the school and me till we registered the club. “What can a form one student do in a school where form four students thrived on harassing the form one students?” Many wondered.
I am proud to report that I doubled up as the chairman and the founder of the club for the four years and became the head boy in form four. In the club’s second year, members grew from 70 to 150 members with form fours students joining the club after a visit from an officer at WCK, Nairobi. The officer who was originally from Canada commanded such respect that she had to be received by the chief then Mr. Wagikonyo, since the officer was an “International Guest” The school and most of the students did not know much about wildlife and the clubs’ entrusted me to engage our guest until she left. The good news was that I was picked to join 16 other pupils back to Canada for two weeks, who were in Kenya for an exchange program. Bad news was my mum could not let me go since I was too young to travel alone. 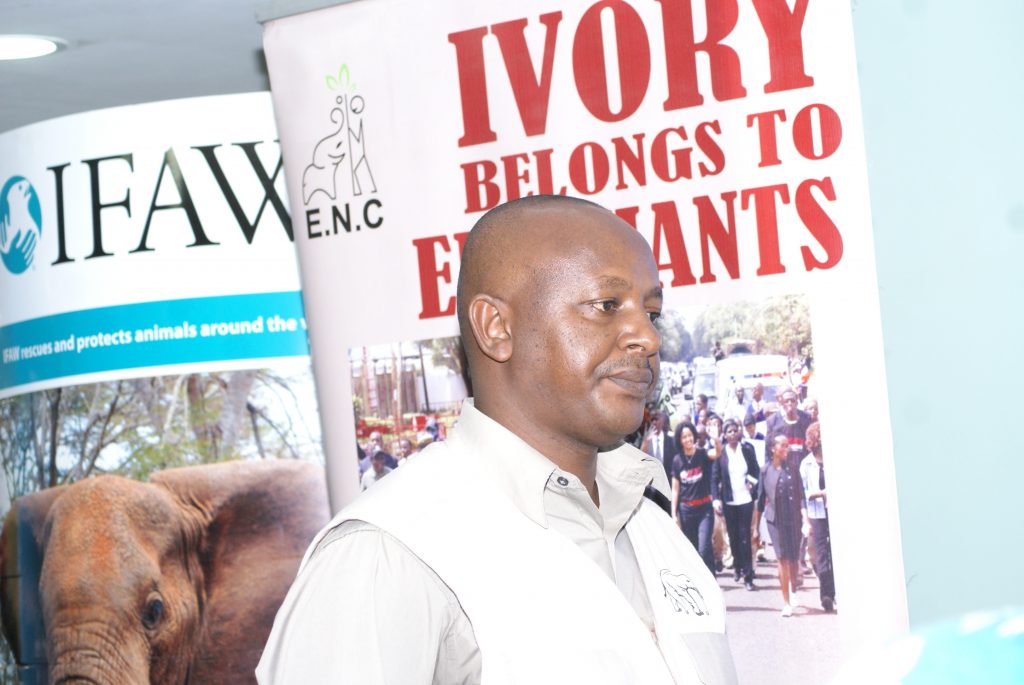 This did not dissuade me from pursuing my passion. Upon finishing high school, through WCK and GEF, I got a scholarship to pursue BSc in Wildlife Management and Natural Resources in Mweka College of African Wildlife in Moshi, Tanzania. In late 90’s Mweka College was second from Moi University in producing wildlife graduates. I joined Kenya Wildlife service (KWS) Elephant program under WWF Mt Kenya, Shimba Hills, Arabuko Sokoke, Loroki Kirisia and Aberdare exploring “The Effect of Confining Elephants in Their Habitats” I worked together with Patrick Omondi. I did not recognize that this was the beginning of working for elephants and for the next one and half decade I would be “ Elephant Man” I will share more on this separately.

Back to conservation issues! Over 70 % of wildlife is believed to be in the areas where communities use land differently which include agricultural practices, development, and uncontrolled pastoralism among others. Looking at the establishment of KWS and other wildlife conservation agencies, it wasn’t until early 2000 when they started considering communities as key players in wildlife management. However, this has not yielded much due to the approach and lack of policy guidelines. Invariably landscape conservation model is now replaced by community based conservation model where wildlife now lives and mingles with the local communities with little attention from policy makers.
There has been an analogy that agriculture is the backbone of Kenya! This was and is done at the expense of encroaching wildlife habitats and converting the rangelands to agricultural land something that has been hindered by the effect of climate change advancing the poverty levels from our communities who started wheat farming and maize farming. Most of these areas include Maasai Mara, Laikipia, some parts of Mt Kenya region and Nyeri.

My concerns now go to the new generation that has no chance of joining wildlife clubs and learn how wildlife conservation and environment play a significant role in our society. Lack of such opportunities, the escalating human-wildlife conflict, poor planning and the application of unrealistic conflict mitigation measures, communities are now at limbo with wildlife and has resulted in viewing wildlife as a nuisance or as pests.

The call of action remains here! We have to transform the thinking, attitude and establish a sustainable action by educating our people on the above issues. If my uncle did not expose me to read “Komba Magazine” where would I be? I was educated not in schools but through meetings and exposure tour and that is what am doing now by educating people as I walk.