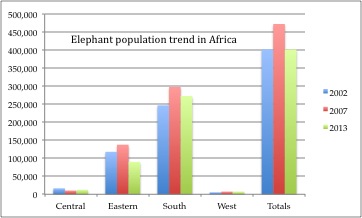 African elephant populations face an immediate threat to their survival from excessively high-levels of poaching for their ivory, other cause of the population decline includes habitat loss triggered by the expansion in human population.

I was looking at the population trend in 4 regions Central, Eastern, Southern and West (below) and it’s clear that we are in the verge of losing our elephants in the continent progressively. It’s appears like we started losing elephants in 2007 and 2013 when Namibia, Botswana, South Africa and Zimbabwe’s elephant population were dropped from Appendix I to II by CITIES allowing them to sell their ivory stockpile to China among other nations “ thus allowing trade in Ivory”. The elephant population was stable from 2002 from a total of 402,067 and in 2007 with 472,269 before the sharp decline in 2013 that left over 10,200 elephant dead in 11 years or so.

West Africa region host forested elephants, this forested elephant population still remains undisturbed and they do not move long distance like the Eastern and Southern regions. This population has for sometimes experienced unique challenge caused by civil war from the neighboring countries causing sharp decline, the birth rate has also been negatively affected as it is depicted that elephant fertility may be caused by the surrounding elephants. Poaching is also playing significant role in decimating the forested elephants in the region.

Looking at the Eastern region the population has declined from the highest numbers of 137,485 in 2007 to 89,860 in 2013 almost 50,000 elephants were murdered in 5 years in the region. One affected country is Tanzania that has lost 65,900 elephants in 5 years from 108,816 elephants in 2007 and 42,871 elephants in 2013, Tanzania borders Malawi and Mozambique countries and they all have cross-border elephant habitats that mean elephant share the same habitats.

According to the African elephant database by IUCN Africa current host 401,650 or less elephants, several studies estimate that in 2025 we could have 160,000 elephant left in Africa. There are couples of good things coming in Africa in resolving this high rate of poaching and loss of elephants in general; some of these approaches include establishing African elephant range state coalition i.e. and Protection Elephant Initiative all geared in stopping the ivory trade that is almost coming to an end. For these initiatives to yield significant move they need head of state endorsements, however the African head of Nations need urgently to come together and identify an integrated approach on how to deal with internal and external poaching triggers as well as instituting a common voice not disjointed approach as it is currently.