According to African elephant specialist group www.elephantdatabase.org in 1995 Kenya hosted 13,834 and currently as at 2013 Kenya accommodate 25,292. Over 80% of Kenya’s elephants are found outside protected areas and the rest in National Parks and Reserves, according to KWS data 78% of poaching is reported outside the protected area.

Elephant Neighbors’ Center (ENC) is a Non- profit Organization whose mission is to protect the African elephant and secure landscapes for elephants outside the protected areas. ENC places emphasis on a three-tier approach: integrating community knowledge, environment and livelihoods in resolving principal problems and bias facing conservation in Kenya. Mr. Jim Nyamu is an ENC co-founder with over 16 years’ experience of studying elephants in Kenya and Africa. In 2013 he walked over 3,000 km in Kenya and in the USA raising awareness on elephant and Rhino poaching.

The Ivory belongs to elephant walk campaign walk has received enormous support from Kenya’s First Lady Margaret Kenyatta, Cabinet Secretary to the Ministry of Environment, water and Natural Resource, KWS and International organizations such as IFAW, WWF among others who walked with Jim separately. Jim has walked over 9000 km now. This walk has brought together lots of communities, counties and learning institutions together both in the US, Kenya, Tanzania and in Uganda for the last 5 years. 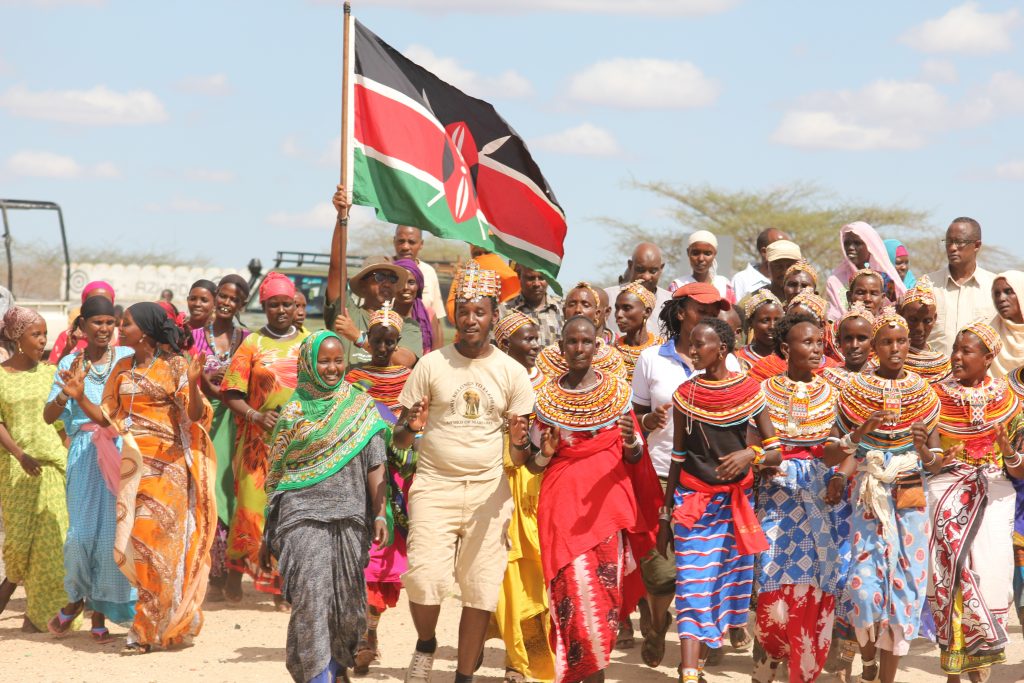 (1) Raise awareness on the elephants and Rhino poaching
(2) Engage local communities on how to participate in wildlife conservation programs
(3) Educate communities on the new wildlife Act enacted early this year.

This year campaign is scheduled to start from National Museums of Kenya in Nairobi and passing though Thika, Murang’a, Sagana, Karatina, Naromoru, Nanyuki, Meru, Isiolo and finish in Marsabit in early April 6th and ends on 8th May 2017 in Marsabit . I am writing this in request for participation and support during the planning.

Mr. Jim Nyamu the co-founder of ENC and flag bearer of the campaigns who has over 16 years’ experience of studying elephants in Kenya and Africa, since 2012 to 2015 has walked over 5000 KM all to raising awareness on plight of elephant and rhino poaching in Africa while collecting opinions of people at local level and coexisting with wildlife to identify the causes and drivers of the rapidly growing human wildlife conflict.
In Kenya Jim has covered over 9,391Km in Kenya on the following walks
• Mombasa to Nairobi -455Km,
• Maasai Mara, Samburu/Laikipia – Mt. Kenya, Nairobi- 1710km
• Meru Town – Meru park -230Km
• Shimba hill – Lamu -515Km
• Nanyuki, Nyeri – Nyandarua -405Km
• Nyeri, Muranga- Ndakaini -190Km
• Emali, Amboseli- Taveta, Voi -460Km
• Transmara, Loita – Maasai Mara -290Km
• Nairobi and its environs -30Km
• Nairobi, Moshi, Dar es Saalam- Mwanza- Kampala –Nairobi 3480km
and internationally covering 976KM from Boston to DC in the USA.

The impact and significance of these campaigns cannot be under estimated, has visited and walked with 2053 learning institutions, 72 universities and colleges in Kenya and in the USA and held over 1057 community meetings, 147 conservation talk, in 30 counties.
As a result of these campaigns ENC boasts of the following achievements

i. Advocating for the revision Wildlife Management ACT and her subsequent penalties from penalty of 1 year or a fine of KSH 40,000 to life in Prison or a fine of 20 million shillings, which was adopted and enacted as a law.
ii. A pioneer campaign to other national campaigns such as Elephants for Kenya and Hands Off Our Elephants;
iii. Internationally represented Kenya’s conservations efforts in the David Shedrick Wildlife Trust International Wildlife Elephant Global March in Washington DC on October 4th 2013.
iv. In partnership with David Shedrick Wildlife Trust and other lobbyist pressurized the USA government to crush ivory confiscated which was later crushed in Colorado in November 14th 2013 in an inaugural event that Jim was invited to witness.
v. Raised awareness against poaching through local, national and International media impressions and interviews including Interviews on Nation Media, K24, KBC, KTN, CCTV, Radio shows on Radio Seattle, Delmarva Radio, Radio Jambo, Voice of America, Good morning America, Print media- New York times, National Geographic, New Jersey. Com, Herald news. Allegheny college news, Daily nation, The Star, The East African, Standard Newspaper reaching over 3 million peoples.